This is the 2001 winner of the Claudia Lewis Poetry Award:

Here is a Digital Trailer for Mammalabilia created by graduate student Megan Moulton.

Here is a Readers' Guide for Mammalabilia by graduate student Holly Koder. 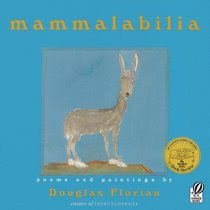 In this book, Florian has provided us with a collection of witty, humorous poems about many different mammals, some of which are not quite your everyday zoo animal. Each poem is about a different mammal and is paired with a simple and almost childlike illustration of the animal. These poems have great rhythm to them, and children will love their rhymes. Florian truly used language and text to his advantage when writing these fun poems.

3. Questions to ask before reading
Invite the children to discuss the following:
♣ Have you heard of the word “memorabilia”? What do you think it might mean? Is there part of that word that sounds familiar?
♣ What kinds of ways can you describe an animal other than the way it looks?
♣ The different sounds that words have and make can really make a difference in poetry. Other than rhyming, what are some special ways to use the sounds in words?

4. Suggestions for reading poems aloud
♣ “Bactrian Camel” -- while the entire group reads the poem aloud, have them trace the line of the text as it is printed in the book in the air with their finger.

♣ “The Zebras” -- for this poem, have 7 volunteers each read a sentence in the poem, one for each voice used.

♣ “The Mule” -- have the group read the last word in each stanza, which are the words that rhyme.

5. Follow up activities
♣ Experimenting with poetry
Have the students break into pairs and try to write a short poem while manipulating form of the text in a way to fit the poem.

♣ Animal Art
Have each student choose a different animal. They can research the different qualities of their animal and then draw a picture of it to emphasize a particular characteristic that they discovered.

♣ Performing Poetry
Since these poems are so readable, have each student memorize a different poem. Then, host a poetry reading to showcase their recitations as well as the poems and artwork they created in response to the book.

♣ Poetry as We See It
http://library.thinkquest.org/J0112392/
Find resources on how to teach your students about different poetic techniques with definitions and examples.

♣ Kid’s Corner
http://www.sheppardsoftware.com/content/animals/kidscorner/kidscorner3.htm
This site has many different activities and games to engage kids while learning about animals.

What the Heart Knows by Joyce Sidman (Houghton Mifflin Harcourt, 2013)

The Watch That Ends the Night: Voices from the Titanic by Allan Wolf (Candlewick, 2011)

Guyku: A Year of Haiku for Boys by Bob Raczka (Houghton Mifflin, 2010)

Red Sings From Treetops; A Year in Colors by Joyce Sidman (Houghton Mifflin, 2009)

A Kick In The Head An Everyday Guide to Poetic Forms compiled by Paul B. Janeczko (Candlewick, 2005)

Here in Harlem: Poems in Many Voices by Walter Dean Myers (Holiday House, 2004)

Amber was Brave, Essie was Smart by Vera B. Williams (Greenwillow, 2001)

This site was created by Sylvia Vardell and is not an official site of the Claudia Lewis Award, the Children's Book Committee, or Bank Street College of Education. Contributors include librarians, teachers, and students who want to promote the award winning books as well as poetry in general among children and young adults.