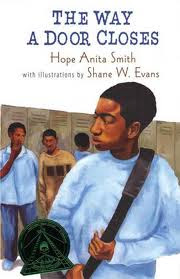 This is the 2004 winner of the Claudia Lewis Poetry Award:

Here is a Readers' Guide created by Heather Noe.

Target Readers:
According to the School Library Journal, this book is recommended for grades 4-8.

Summary:
The Way A Door Closes by Hope Anita Smith consists of a series of poems about a family’s struggle told through the eyes of the oldest son, C.J. At the beginning, the reader is taught about the roles of the various family members, as well as how the family operates as a whole. A special emphasis is placed on the role of the father, yet the reason for this is not understood until later. Towards the book’s middle, hard times fall on the family when the father loses his job. His character changes from being a strong leader, to someone who shows weakness and tears. This change is something that causes a difficult adjustment for C.J. and his siblings. C.J. talks about how he can recognize certain things about a person based on how they close a door. When his father exits one day, C.J. understands that its implications are indicative of his abandonment of the family.

With the father gone, everyone is faced with challenges and sorrow both at home and in the community. In different ways, the family members take over certain responsibilities to make up for the missing father, yet the absence has cast a dark shadow over all. Fortunately, the father returns at the end, and the manner in which he closes the door tells C.J. that he is back to stay.

“Readers will be deeply moved by the portrait of a rooted, extended family that makes it through hard times.” –Booklist

Questions Before Reading:
The following are possible discussion questions to ask before reading this book:
1) What does the title, The Way A Door Closes, make you think of? How does it make you feel?
2) What tone is set by the cover’s illustrations, and how does the book’s title also contribute to this tone?
3) Imagine you have a friend who is really sad about something that is going on at home. How can you be a good friend to that person, and what would you tell them?
Suggested Poems to Read Aloud:
The Whole World in His Hands- Have the children read the poem in groups of four and rotate reading seven lines each. Once finished, the students should discuss how the manner in which each family member sits depicts their personality. This group discussion can lead to a class discussion or larger group discussion of the different characters’ roles in the family as implied by the poem and illustration.

The Way A Door Closes- Six volunteers will be needed. One child will read the poem aloud, while the other five act out each character that is mentioned going through the door (grandma, mama, the sister, C.J. and the brother, and the father). After each person goes through in the manner described by the poem, the instructor (teacher or librarian) should lead a group discussion on what we think each character is feeling based on how he or she passed through the door. An emphasis should be placed on the differences between characters, and what they must be feeling.

Astronomy 101- Before reading, the teacher should do a mini demonstration to teach blue moons. After this, class should be divided into groups of three and rotate reading every eight lines. Once the students have finished reading, they should discuss in groups what they think has occurred in this poem, and why they think “blue moon” analogy is used. This discussion can turn into a large group discussion

Follow-up Activities:
Poetry Writing- Children (or students) can be instructed to create their own mini-book that tells a story through poems. It can be about something true and personal to them, or something that is made up. It is important that the students divide the plot of their story into individual poems, complete with titles. To make this activity more fun, it could be turned into a contest with multiple awards to be won. Sample recognitions include: best individual poem, most unusual story, best artistic accompaniment, best use of poems to tell a story, etc.

Art- Children, after finishing their poem books (above), can create art that accompanies each poem. The art should have meaning. For example, if the poem is depicting a character or feeling, the corresponding art should communicate the character’s personality or what that feeling is like. Students should use The Whole World in His Hands from The Way A Door Closes as an example, because the writing and art in this particular poem work together successfully to emphasize each character’s role in the family. This application can be used as part of the contest (mentioned above), as well.

Macmillan: Hope Anita Smith- This site also provides information on the the author and her works.
http://us.macmillan.com/author/hopeanitasmith

Coping With The Loss of A Parent (Divorce, Death, Abandonment)- This site provides information about people who are going through situations like C.J.’s in The Way A Door Closes. It explains what people in that situation might be feeling, and teaches readers what signs are indicators.
http://childdevelopmentinfo.com/parenting/children-coping-loss-of-parent.shtml

The Friendship Blog- This site provides a blog for people to discuss situations in which people might be in great need of a friend. It also talks about how to help other people (or yourself) cope with certain familial situations, just as C.J. has to cope with his family’s abandonment in The Way A Door Closes.
http://www.thefriendshipblog.com/blog/needy-friends-friend-indeed

Fiction:
The Skin I’m In- This story, much like The Way A Door Closes, deals with accepting things in your life that are personally uncontrollable. It is told through eyes of a child that is going through these issues, just as the reader looks through C.J.’s eyes in The Way A Door Closes. Additionally, the target reader age level is the same.
Flake, Sharon. The Skin I’m In. New York: Hyperion Books for Children, 1998.

One Crazy Summer- Having a parent leave is something that can cause great confusion for young children. The protagonists (3 sisters) face this issue in One Crazy Summer, just as C.J. and his siblings do in The Way A Door Closes. Though it is not poetry, the target reader age level is the same.
Williams-Garcia, Rita. One Crazy Summer. New York: HarperCollins Publishers, 2010.

Nonfiction:
The Moon Book- This book is one targeted for elementary readers (grades 1-4) that uses very basic verbiage to explain the phases and different occurrences of the moon. Considering the scientific application (mentioned above) regarding the scientific analogy of Smith’s last poem, this book could be a good source for children looking for information about blue moons.
Gibbons, Gail. The Moon Book. New York: Holiday House Publishers, 1998.

The Myth of the Broken Home- This book is one that deals with the central conflict of The Way A Door Closes. Despite its applicable content, this book would be better used by the teacher or librarian teaching the material or reading the book to children. This book discusses real-life cases like the one that C.J. faces in Smith’s book, and teaches how to handle those feelings and emotions. By having this as a resource, the librarian or teacher will be better able to handle the sensitivity of the subject matter when using Smith’s poetry book with the children.
Gabrielle, April. The Myth of the Broken Home. Chula Vista: Put it on Paper Publishing, 2010.

Posted by Sylvia Vardell at 7:02 PM

What the Heart Knows by Joyce Sidman (Houghton Mifflin Harcourt, 2013)

The Watch That Ends the Night: Voices from the Titanic by Allan Wolf (Candlewick, 2011)

Guyku: A Year of Haiku for Boys by Bob Raczka (Houghton Mifflin, 2010)

Red Sings From Treetops; A Year in Colors by Joyce Sidman (Houghton Mifflin, 2009)

A Kick In The Head An Everyday Guide to Poetic Forms compiled by Paul B. Janeczko (Candlewick, 2005)

Here in Harlem: Poems in Many Voices by Walter Dean Myers (Holiday House, 2004)

Amber was Brave, Essie was Smart by Vera B. Williams (Greenwillow, 2001)

This site was created by Sylvia Vardell and is not an official site of the Claudia Lewis Award, the Children's Book Committee, or Bank Street College of Education. Contributors include librarians, teachers, and students who want to promote the award winning books as well as poetry in general among children and young adults.